Buckle up, kiddos. This post is vaginoriffic! (Now in new lemon scent!)

So as I mentioned in the last post, I recently went to the Mac Daddy of women’s blogging conferences.

I laughed a lot. Like, a LOT a lot. I cried a little. I became exhausted, overwhelmed and INSPIRED. And I want to tell you about all that. I do. And I probably will at some point.

I want to tell you about when POTUS spoke. (POTUS is apparently the way intellectual types — people like myself, obviously — refer to the President Of The United States. Get it?)

I want to tell you about all the smart, witty, creative women that I met, including some total ROCKSTAR BLOGGERS (in that, I had the urge to throw my panties at a few of them while they were reading because they’re so effing cool).

I want to tell you about how I spent three days up the ass (not literally) of one of my best friends on the planet and you know what? I’d do it again.

I want to tell you about how we came back to the hotel room night after night completely mentally overwhelmed and physically tired and then we’d spend another one to two hours just talking.

But first, people, I have to tell you a little more about the swag.

(Veteran Blogher types: I KNOW IT’S NOT ALL ABOUT THE SWAG. QUIT FUCKING TELLING ME. But I can’t pretend I’m too cool to ignore the massive mindfuck of being wooed by a Jimmy Dean sausage sandwich one minute and then turning around and talking about whether or not I’m incontinent and have heavy periods three minutes later. That Blogher Expo. Shit, girls. It was something else.)

I am a target audience, motherfuckers

So the thing about Blogher, if you don’t know, is that vendors descend on this thing like crazy because women bloggers can really get the word out about new products.

The Expo had everything from fishsticks to Chuck E. Cheese, from personal entertainment systems (thanks, Trojan!) to home enertainment systems. Everybody wants to chat you up and give you stuff. And some of the stuff is fuckin’ cool. (And some of it is not.)

The first night of the conference they have an Expo party. You can cash in your tickets for free drinks (squee!) and then walk around the Expo collecting all sortsa crap.

So my pal … uh, I don’t think she’ll want me to use her real name … let’s call her “Mavis.”  Anyway, Mavis and I went and filled up our bags.

So remember, I was still recovering from my herpes when I left for this conference. The first day was a long one. I was exhausted. Mavis was fighting off a migraine. But put some painkillers in us, mix with a little wine and and an assortment of various random freebies (a flashdrive shaped like a DOLE banana! I bet you don’t have one of those!) and we were off. In fact, by that point, I’d say that we were both past the point of fatigue and had descended straight into giddiness.

Many vendors wanted you tweet something with their product #hashtag to win a prize. For instance, one company wanted you to tweet what you would name your Roomba-like robot vacuum. (But it wasn’t Roomba. It was some other company. Can anyone else see how I would be super attractive for companies that want to do affiliate marketing??? Hey readers! Buy this product! I can’t remember who makes it but isn’t it nice?)

By the time we got to the booth where we collected our giant, pre-filled, official Blogher swag bags, we were like delirious, ravenous kids on Christmas morning. We dug in immediately.

Then we got to the item from Poise. You know Poise, right? I like to think of them as the Ladies’ Moisture Company. They do the commercials where Whoopi Goldberg talks about weeing herself — no judgement from me, btw — I’ve found that any time I find myself saying “Thank God that doesn’t happen to me!” it’s usually only a matter of time.

We’d skipped their giant booth downstairs but now they had my attention.

Their swag? A small personal fan with a flashlight on the end. Mavis and I pulled them out and gave each other a “Huh?’ look. Then Mavis read the tag. “Oh, it’s for hot flashes,” she said.

That made sense. I guess. But then I remembered: Poise’s whole deal is moisture. Down there.

“But isn’t Poise the feminine moisture company? You know, for like, your coochie area? Maybe this is a fan for that … maybe it’s to dry out your vagina! See? That’s why it has the flashlight on the end!”

And that was too much for us. We bent over, absolutely howling in the delirious manner of escaped mental patients.

When we caught our breath, I turned my fan on. “This thing doesn’t have much power. This is no match for my vagina, I can tell you that! OH! I am totally going to bring this on the dance floor tonight and dry out everyone’s vaginas while we’re dancing!”

Mavis was still laughing but also starting to look a little worried.

“Mavis, you’re going to wake up to a whirring sound tonight and find me bent over you in the bed, fanning your vagina. I hope you don’t mind. I’m just trying to be a good roommate.”

Did I mention that when we walked into this section of the Expo, we noticed a few hotel staffers carrying in crates of vibrators?

I spotted them immediately. Apparently I have an eye for these things.

“Mmm hmm,” the lady who was manning the door piped up. “They’re giving away free vibrators.”

People. That is sisterhood.

“Wow! We didn’t even have to ask! Sure! You guys have the best swag ever!” I exclaimed. 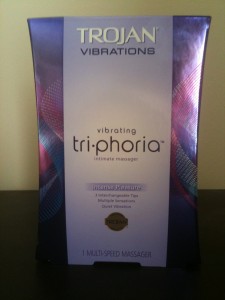 He hauled out two purple boxes and handed them to us. “Do you have any questions about them?”

Really? Thank God my inner censor works at least part of the time.

“No, not right now,” I said. “But is there a tech support line or something in case I need some help later?”

He assurred me that there was.

As we were leaving the Expo I remembered my girl at the door. “Hold on!” I told Mavis. I ran back to the Trojan booth. “Can I get another one of these for my friend?”

I grabbed another purple box and a discreet silver gift bag and walked it over to the door. “Here ya go!” I said. “I told you I’d hook you up!”

She was happy. And I walked away feeling like good old Saint Dick. 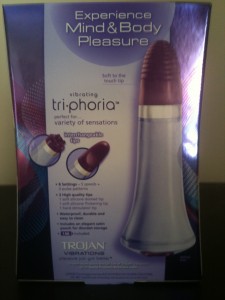 Yes, those are balloons

From there, we went right to the Peoples’ Party, where I got to wear a dress made entirely of red balloons … swear. But my phone was outta juice so I have no pictures of it. However, the official event photographer got me posing with a cutout of The Bloggess, so I’m hopeful that those pix turn up somewhere (or not). Then I turned myself into the Special Consort to the Dress for the rest of the evening and made sure that it got passed around. 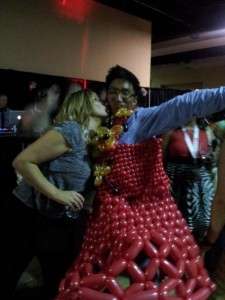 Me and a very brave dude blogger, who not only attended Blogher, but donned the dress. Anthony Leem, I salute you!

I also got to dance with a fuzzy, one-eyed bowling pin. Yes, it was another vendor. The dude in that costume owned the dancefloor — and had the pleasure of being dry humped by many a tipsy female blogger.

But the best part of the night was laughing my head off with a bunch of new bloggy pals. Funny, fun, fantastic women, including Ellie DeLano, Aviva Ruben, Emily Y and a load of other great chicks whose cards I neglected to get. (Tweet me, bitches!)

Then, inspired by the Roomba-that-isn’t-a-Roomba booth, we decided to name my vagina fan.

So here she is, peeps. Fanny the vagina fan. She’s available for parties as well as personal consultations. 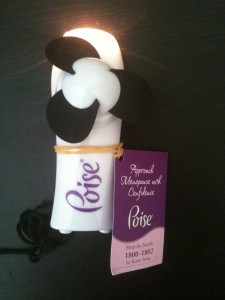 Fanny, the vagina fan. She loves her job.

More from the Bloggity

According to Trish has moved – and I need your help!

Building Habits: My Next ADHD Challenge

Insomnia: The Only Thing Standing Between Me and Being ‘Normal?’

Not That You Asked, But Here’s Who I’m Endorsing for the Dem Candidate (So Far)

A Holiday Message to All the Single and Divorced Parents

According to Trish has moved – and I need your help!

Building Habits: My Next ADHD Challenge

Insomnia: The Only Thing Standing Between Me and Being ‘Normal?’

Not That You Asked, But Here’s Who I’m Endorsing for the Dem Candidate (So Far)

A Holiday Message to All the Single and Divorced Parents

I participate in the Amazon affiliate link program. I might make a few cents or sometimes even a whole dollar if you click on one of these Amazon links. I'm supposed to let you know that. And now I have.

Want to get an email whenever I publish a new post? Of course you do. Just sign up below.